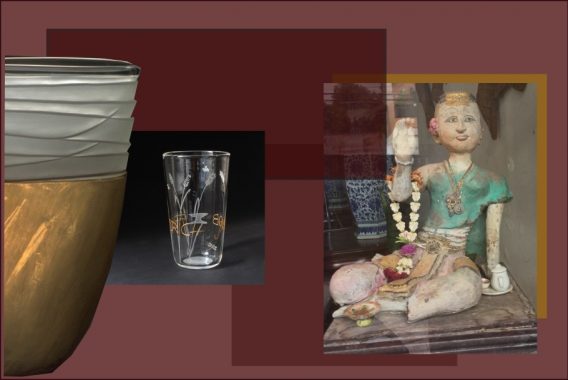 Immerse yourself in a fragile world

How are elegant glass objects created that fascinate in their simplicity?

Anyone who enters Wiebke Vogt’s small artisan studio in Berlin, the district of Charlottenburg is immersed in a world of finely colored glass objects. Wiebke’s frosted golden vessels also create a mood that makes us perceive the world a touch calmer and more serene. For over 30 years Wiebke designs the ‘fine objects for everyday life’ and her ‘vessels of silence’ in her workshop.

What is special about Wiebke’s glass art?

Glass as something fragile that needs to be protected and handled with care – what could be more perfect as a christening gift? Wiebke Vogt’s hand-painted, sandblasted, and gilded baptismal motifs on a plain glass reflect that. Her glass art with its delicate gilding and designs can be found on beautifully shaped glasses for everyday use. But the stories her glass objects and vessels tell are more likely to be experienced in quiet contemplation and usage. Wiebke Vogt’s glass art can be found in many museums and collections in Europe, Japan, and the USA. Thus, her ‘vessels of silence’ inspire and enchant people all over the world.

How enriching are foreign cultures?

Wiebke has travelled a lot in her life, or as she prefers to see it: she immerses herself in the culture of the country. Above all she gets in touch with people, she lets herself be taken along and allows herself to be impressed. Glass art is not her only medium to manifest her artistic intention. In addition her words make her thoughts and observations legible to other people.

“I am a cultural traveller. It is so exciting to observe how people sometimes move through life. To see the way they interact with each other. What touches their heart? What is normal for them? Furhtermore how do they use things in everyday life that we are so unfamiliar with? All of this makes traveling an enriching experience.”

What does ‘being open’ mean to Wiebke?

Wiebke is open to new impressions on her travels. In addition she lets herself be inspired by other cultures. Of course museums and exhibitions or conversations with friends and strangers are also important to her. Many things enrich her work as an artist.  Due to Wiebke’s observation of nature some of her glass objects have therefore the theme name ‘the beautiful things of everyday life’. The accurate details showcase her artistic talent. In addition the matte gold patina or the use of other precious metals such as silver or platinum give her vessels a value without serving common ‘trends’.

Why gold as a style element?

Gold has exerted a fascination on people for centuries. The shimmer of a candlelit gilded Buddha or the golden artifacts in a Romanesque church create a mystique all their own. With this in mind a golden gift stands for a special appreciation. Wiebke applies the gold accents to a glass in an extremely experienced manner and with a calm composure. The fact that her miniature bottle contains gold worth 500 euros is a sign of the preciousness of this unique metal. Surely Gold still plays a special role in artistic craft objects even in the 21st century.

How do I implement my artistic ideas?

Not only the artistic idea is important, but also the technical ‘know how’ is necessary to achieve the desired goal. Due to her time as a chemistry student, Wiebke brings the appropriate knowledge to realize her designs. For example, she achieves a perfectly even glaze when firing the precious metal glazes on the large glass moulds. This is impressively perceptible on the ‘Vessels of Silence’.

“The precious metal substrate penetrates through the heat into the supposedly closed surface of the glass. And since many metals have colouring properties, gold, for example, colours a glass slightly pink. Furthermore cobalt produces a slight blue tint, and silver reveals a delicate yellow hue. In addition I also incorporate this into my design work.”

Wiebke’s motifs and designs evolve over the course of her career and some designs represent certain stages of her life, like the little dragons from her early days. After all these years her dreamed up mythical creatures can be found all over the world.

What does ‘destiny’ mean to Wiebke?

Generally Wiebke routinely plans and coordinates her work steps. But her start as a glass artist rather starts without long planning. When she applies for a 3-year course at the Craft college in the Bavarian Forest, she is in her late twenties and looking for an alternative to studying. In her student town Munich she discovers impressive photos of colored glass windows in a magazine about Polish arts and crafts. As a result she is enchanted by them and ready to make her next step. Her application portfolio shows her talent for color and form. And this is how Wiebke convinces the director of the college that she is suitable for the class – even long after the application deadline. Clearly she perceives this is a sign of destiny

“I believe that when a decision in life is right, fate suddenly makes it very easy!”

In the first year the focus is on the practical training in four disciplines: apparatus blowing, engraving, glass cutting and painting. Than Wiebke’s ‘aspired and desired designer training’ starts for the following two years. The technical classes are important for the mould making process. While the variety of design classes secure and perfect her artistic intention. After the graduation Wiebke first works in the industry. But then she is fatefully drawn back to the vicinity of her home area: to the north. Berlin is not located by the sea, but the city has an exciting artistic scene in the early 1990s and many likes.

Surprise experience: Asia and the image of women

During her first travels in Asia, Wiebke experiences how naturally Asian women go about their own business. They sell their goods in the markets and seem to live a free life in other ways as well. In Vietnam, she stays with a woman who absolutely impresses her with her knowledge of the world. Wiebke finds her soul mate with the Asian culture and experiences their special spirituality in some Buddhist monasteries.

“When I observe a Buddhist sculpture, I feel very strongly the internalization of the figures. They are with themselves, in conversation with their deity. It is not an art that goes outward. What is important is the telling of little stories. When I saw the first female Buddha figure, it fascinated me very much. In Japanese art it is also important to repeat a handmade process step over and over again. This guarantees that even the smallest detail is perfectly executed! This extreme concentration and dedication generate a work flow that makes the final craft objects divine.”

Both aspects can be found in the creation process and in the perception of Wiebke’s glass art.

For Wiebke, it’s a trip to Morocco. To walk silently through the golden sands of the Agafay desert and sleep under the open sky. And getting to know the art and craft culture of the Bedouins. She also likes to revisit familiar places once she finds herself touched by them. Her favorite museum is the ‘Kolumba’ in Cologne. Wiebke always finds new pieces of art there to observe and to be inspired by. On her next visit, we will for sure meet there again for new inspiring conversations about art and the world in general.

The way to my little seagull with the ‘slipped’ crown!

Many of the small fine motifs on Wiebke Vogt’s glasses show where she spent her childhood: at the seaside in northern Germany. As a result water, sailboats, the seagulls, and many other motifs show her longtime observation of nature. Therefore she creates these miniature size icons in a perfect manner down to the smallest details. This is how ‘my little seagull’ was created during the interview.

“In the morning, the colour of my cappuccino now creates a perfect color background for my seagull with the tiny golden crown – wonderful!” 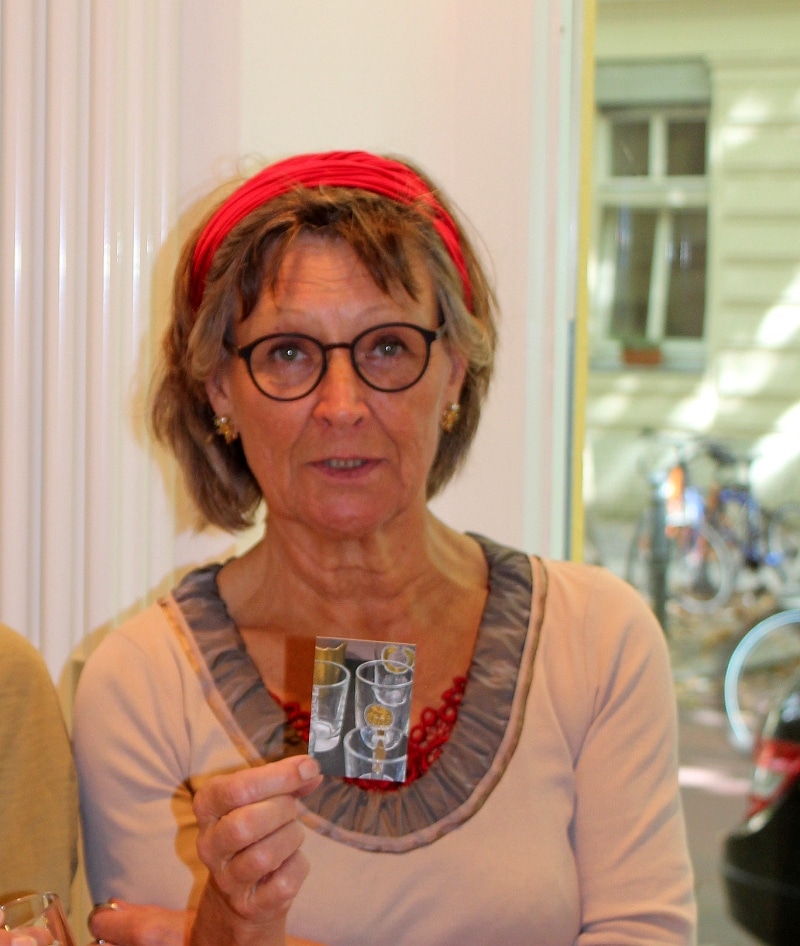 Her profession is:  Glass artist & artisan

You can find her in:

Berlin, in the district of Charlottenburg, her studio and salesroom can be found in a small quiet side street of the busy Kaiserdamm street

coffee with cream in the morning, swimming – absolutely! preferably in the sea, in a lake or in a swimming pool – depending on the weather and enjoying my favorite view: of course – looking over the ocean

Marion Gräfin Dönhoff – a German journalist, author, and editor of the famous German weekly newspaper “Die Zeit” – she explained ‘politics’ to me and showed me how important it is to have an opinion.

Listen carefully, look closely, be attentive and ask questions!  It’s important in life and in your work.

Small film festivals, such as the ‘Eastern European Film’ Festival in Cottbus – Eastern part of Germany

Be the first to know

Be part of this exciting journey and sign up to the newsletter and updates.